Talking to Teens About Pics on Insta

This post was inspired by a question from a good friend, who has a family member with a teen daughter with an Instagram account. The advice in this blog is aimed toward talking to young people on the female side of the gender spectrum but has resonance for all young people. Obviously, it isn't only about Instagram.

I accept that young people will be connected with social media. Most of us are. In fact, I'm accepting of the argument that it is rapidly becoming impossible to exist as a part of the community of humans without some connection to social media. Therefore, this post isn't about how awful it is or how it's changing us or how we need to stay away from it. I want to talk frankly here about useful, non-fear-based ways to engage with teenage children about the stuff they put up there. I want us to maximize the possibility that these conversations will be connecting and protecting instead of shaming or punishing.

So, you probably know where I'm going with this. It's a parental nightmare. Your neighbour screen shots a picture from her daughter's phone of your 13 or 15 or even 17-year-old daughter posing in her underwear or some wicked sexy bikini and posting it to her social media. You freak out! You think of the following things.

Some of these things are more practical than others but none of them are headed in a direction that is going to solve the problem you think you see. I want to talk about something a bit more nuanced here.

When you freak out, yell and punish. You are shaming your kid. "What is wrong with that?" you may wonder. Shame is a motivator for sure. It motivates people to back away, shut down, hide and collapse. It may look like they are complying with your request for a change of a certain behaviour and on the surface, they are. But, they are doing it while feeling deflated and abandoned. Young people especially, hear they are bad, bad to the core, unworthy. You may think this will motivate them to be better or respect themselves more but in fact, you are confirming that you think they are unworthy and this may have a lot to do with the reason they are posting sexy pics for attention to begin with. It's unlikely you are solving the problem. At best, you are probably just kicking it down the road a bit.

Yes, according to the law, when it's the bra and panties, it is and this is why you need to be very, very careful to conduct the best possible version of parenting intervention you have in your tool kit.

There is a reason your kid is doing this. On the surface, the reason may be something about seeing her favourite celebs do it. It could also be about her friend circle, or some YouTube star or a kid she likes in school. There are also deeper reasons at work. She may feel isolated in her life and this is a way to draw people to her (notice I didn't just say "looking for attention"). She may feel uncomfortable with her changing body and this is a way of dealing with that. She may even feel powerful in her body and she wants to exercise that power. There is a vast range and you don't know what it is unless you figure out how to talk to her about it.

So straight up, I'm going to tell you what I'd say to my teen daughter (Sorry if you find this on the internet someday, daughter, I'm not naming you and I hope I was a thoughtful as this post if I ever had to actually have this convo with you).

I would approach her when I was in a decent head space and she was too, not too late at night and not when there was something on the agenda in a half an hour. I would maybe go for a long dog walk with her or something else we like to do together. I could take her for ice cream. During the activity I would say something like this:

"I know this is kind of weird but I need to talk to you about something that I saw on Instagram I know it wasn't meant for me but I can't un-see it so we have to at least have a little moment about it. That picture of you in the cute bikini. It's a pretty gorgeous picture and it looks like you are feeling good about how you look. I get that. I want you to feel good about that sort of thing, feeling comfortable in your body and stuff. I also want to make sure you make good choices about how you share the amazing thing that is you. Can you tell me more about why it was important to share that? You are smart and you totally know it's going to make a parent go AHHHHHHHH. I'm trying not to be that parent exactly. I'm trying to understand what you are looking for and talk about how you can get that thing."

At this point there are any number of variations on the response, embarrassed, "I don't know", "Why do you care", "Because I want to", "Why are you in my face", "Stay out of my life", "I hate you". Do not be distracted by the dog and pony show here. It's meant to put you on the defensive and avoid the realness of the conversation. Stay calm, tell them you love them and you know that they know that this stuff gets abused, used and twisted against them. No matter how cool their friends are, this is the real world and someone is going to say something or do something to twist around the vulnerability of that photo. "The world is a crappy place in a lot of ways for women and I want you to be in charge of you and your body. Now that image is out there, you are no longer in charge of it (and also, it's technically porn, which is weird, but true, so even people you love and trust are at risk of getting twisted up with bad legal stuff, which you don't intend). These pictures mean so much more than cute pics of you and the dog. We wish that wasn't true, but it is."

At this point, there are so many variants, I don't know how to proceed with the narrative except by writing a book. But I want to point out several key things about my imagined ideal parental response.

First of all, this parent is not shaming their child for being sexual. 14-year-olds are thinking sexual thoughts and having sexual feelings. Our world offers plenty of opportunity to sexualize them in yucky ways and not a lot of opportunity to be wholesome about it. Be wholesome, accept sexiness as a fun thing and then put the power in the kid’s hands (mostly) to make better choices about their sexy expressions. What are those? Good question. Public internet photos can probably be not on the list. Good teen fiction, a book about female sexuality that is positive, bra shopping with friends, these are better choices.

Second, this parent is comfortable with sexuality themselves. You have to do your own work to raise your own kid. If you are full of shame about your stuff, be really mindful of how you are passing that on to your kid. Sex is a thing. It's beautiful, powerful, dangerous and transcendent. It's inescapable so take a look and deal. You will be less shocked and have less sand in your hair if you stop burying your head.

Finally, the parent does have an agenda. They will reveal this slowly. But they want the kid to come around to make the decision themselves. If the parent does not freak out, there is space for the child to make different decisions. If you force them to a defensive place, they will justify what they did and make no room for other choices. Some of their choices may remain uncomfortable for you. You can tell them that and invite their empathy to you. Ask them to tell you why you shouldn't be concerned about strangers rating their boobs, but really ask them and be open to the answer.

I'm not telling you not to take away the phone ever. Certainly, sometimes this is appropriate. Teens don't always understand longer term implications and sometimes just need a hard-line boundary until their forebrain catches up to the rest of them. But don't do that before you have fully explored how they feel about it and fully, compassionately, lovingly related how you feel about it. Most of all, if you are avoiding talking to them about it, ask yourself why? A failure to engage can be just as much a betrayal and abandonment as over engaging. We can sometimes get caught up in clinging to ideas about childhood or innocence and miss what is happening right in front of us. Our kids grow up. They meet danger. They make poor choices just like we did. The consequences often outweigh the choice. Think about yourself and think about being real, giving them choice and tools and mostly mostly. . .tell them you love them. 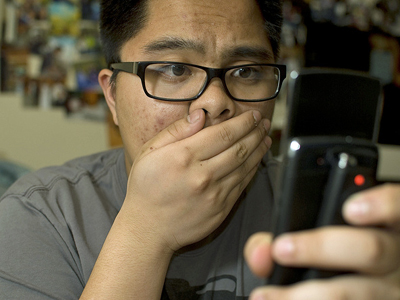